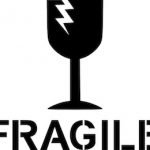 I recently read a brilliant illustration. Imagine you wanted to send a priceless wine glass to a friend through the mail. You would find a reinforced box and wrap the glass with thick layers of soft padding. You would double-tape the box and, before sending it, you’d write in all-caps with a fat red Sharpie on multiple sides, “FRAGILE: HANDLE WITH CARE.” The glass is valuable but easily breakable.

What is the opposite of that? As the author of the book observes, and I admit that it was what first came into my mind, most people think the opposite of the wine glass is something such as a hard cover book. Wrap it in a tough box or wrap it with tissue paper, it probably won’t matter. Will the post office be careful with the package? Also, it doesn’t matter. A book can survive a lot and isn’t likely to be busted.

Between the two, which type of student would we want most? Our sixth year Omnibus (a History/Lit/Theology combo) class finished Moby Dick a few weeks ago. I audit the class but am behind in my reading, so I more recently came across this exhortation from Ishmael about halfway through the story; it’s about the benefits of being like a whale.

It does seem to me, that herein we see the rare virtue of a strong individual vitality, and the rare virtue of thick walls, and the rare virtue of interior spaciousness. Oh, man! admire and model thyself after the whale! Do thou, too, remain warm among ice. Do thou, too, live in this world without being of it. Be cool at the equator; keep thy blood fluid at the Pole. Like the great dome of St. Peter’s, and like the great whale, retain, O man! in all seasons a temperature of thine own. (Melville, Herman. Moby-Dick: or, The Whale (pp. 334-335). Penguin Publishing Group)

I like that: an internal temperature of one’s own no matter the season. But, this is not actually the opposite of the wine glass. The book is sturdy, (and, as Melville argues, a whale is self-controlled), and that is good, but sturdy is not the opposite of fragile. The opposite of easily breakable would be some substance or some product that not only survives, it gets better being knocked around. Imagine writing on the outside of the box: “MISHANDLE LIKE NOBODY’S BUSINESS!” By the time the package arrived, having been thrown against walls and dropped on the floor and kicked out of the truck, the contents have gained value, not lost it. This is more than robust, this is antifragile (which is the name of the book I’m reading).

Our society is doing a great job at making fragile persons, including Generation Snowflake that needs puppy petting therapy rooms in order to recover from hearing a new idea, especially one that challenges long-held but shallow-rooted assumptions. Written on the side of our schools: “Fragile: Don’t touch.”

It doesn’t need to be that way.

My wife regularly says, though she doesn’t claim to have come up with it, that we ought to be preparing our kids for the road and not preparing the road for our kids. Parents want their kids to do well, to succeed, to pass them. But this doesn’t happen by making everything smooth and easy. Our kids will succeed not when we’ve put enough padding around them that they “survive.” Besides, we can actually do better than making them sturdy. What if we trained them in such a way that when the world throws crazy things at them they thrive?

This is our mission at ECS. The school board finalized our mission statement last summer.

The world is certainly offering her alternative to a Christ-honoring culture. The chaos and the volatility that come with denying the Lordship of Christ is bad, but, for the right kind of person, such chaos is the perfect opportunity. The culture of unbelief is hostile, but it is also self-defeating. It can’t stand on its own; it has to borrow any truth it depends on. Our students are being equipped not merely to withstand the attack, but to take advantage of every weakness in the system and tip it over.

Such training requires a variety of things, including the “tools of classical education.” This is an old pedagogy, with a Dorothy Sayers twist that emphasizes certain parts of training with certain ages of development. There are three categories of these tools considered under the heading of the Trivium (one of the things that goes into the Classical school difference): Grammar, Dialectic/Logic, and Rhetoric.

Antifragile students know their facts. They know that there are only three grammatical genders: masculine, feminine, and neuter. They live in a world of “he”s and “she”s and “it”s. What an advantage to distinguish male and female and not only when choosing a restroom or hooking up a sound system. They know that two plus two equals four, all the time, because God made it that way. Our youngest students sing about the Bible and about the catechism and about the parts of speech because they love to sing and because they don’t have any doubt about God’s good gifts in creation. This is the Grammar stage.

Antifragile students test their arguments as well as the advertising propaganda shot at them. They know that syllogisms can be valid, but not sound, yet we’re looking for both. They live in a world of good, better, and best, and are learning to distinguish which is which according to created categories and according to the standard of God’s Word. This is the Logic stage.

Antifragile students express their ideas. They’ve assembled truth and assessed what is good and they prepare to adorn their persuasions. They are polishing their prose, poetry, and presentations. “Rhetoric is the class that’s trying to turn [a student] into a leader” (Rebekah Merkle, Classical Me, Classical Thee). This is the Rhetoric stage.

All of these things together work toward making courageous, Christ-loving, Christ-honoring students. We need young men and women who can choose well and advance at crosswords we as parents and teachers can’t currently see. We’re working to equip students who get stronger by figuring things out, with a deadline, with others depending on them.

At ECS we are laboring, with laughter, to produce a certain kind of antifragile person who is “impossible to sneak up on” (Merkle), who is part of a community of those who not only are not easily broken, but who relish the opportunities to build in a broken world.

These notes are from my talk at the 2018 Information Night.