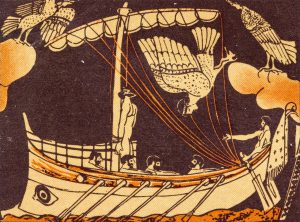 We’re wrapping up the first of four weeks’ worth of reading of Homer’s Odyssey in our Omnibus class, and we’re finding application in rather unlikely places.

One takeaway relates to the family. Without question, the Odyssey would not be nearly as interesting – and enjoyable – as it is were it not for Odysseus’ son (Telemachos) and his faithful wife (Penelope). While all of the characters have their own flaws and admirable traits, one cannot miss the value of family to the establishment and preservation of a civilization.

Telemachus has a dysfunctional upbringing, being raised (essentially) by a single mom in a house occupied by over one hundred suitors who vie for her hand in marriage. That’s enough to confuse and frustrate any kid. While his spineless tendencies are frustrating early on in the story, it’s rather impressive that he has turned out as well as he has, under the circumstances.

The reader sympathizes with the hero, Odysseus, who just wants to get home. The going is made tough(er) by a disgruntled Poseidon, but Odysseus does not lose heart or stop trying to get back to his beloved Ithaca.

But I am compelled by Odysseus’ effort to preserve his family. Penelope patiently waits (twenty years?!) for her husband’s return, fending off suitors in the interim and raising young Telemachus. Telemachus longs for his father’s return from the Trojan War and often becomes sad when thinking of his unfortunate father.

But easily lost in all of this is the value of the family. The family is the cornerstone of civilization. As the family goes, so goes the culture. It was the case in a 3,000 year-old piece of fiction and it is the case in our lives today. How quickly we forget that children’s conception of right and wrong are forged in the home. Children’s first notion of what their heavenly Father is like comes from their earthly fathers (or father figures). Children learn how to be courageous (or not), how to die to self (or not), how to prefer others ahead of themselves (or not), and how to work hard (or not) first from their parents. They can learn these things from a variety of sources, but it is first evident in the home.

And if the enemy can reach us on the family level, he can score a major victory in the battle. That is why the family is under strategic attack by the enemy today. Ours is a society that sanctions the marriage of husband and husband. We will kill our own children in utero if doing so is convenient or expedient. The powerful and influential institution of the family is under full-scale assault while we make like frogs in the heating kettle.

Though it’s certainly not the point of the story, this lesson in the white spaces made for some healthy discussion among our students. It is incumbent on all of us to help to preserve and cultivate biblical relationships first in our own homes if we would look to impact the dying world around us.
When we can do that, little things like fighting off mythical monsters on the way home from work should be a cakewalk.

Week five of the Omnibus finds us studying the books of First and Second Samuel. These books make a rather salty contribution to the river of Western Civilization. They help flavor the waters in ways that showcase yet again the fallenness of man and his need for a savior. Further, they showcase the kindness and goodness of God in continuing to use those same fallen men in His sovereign plan. In perhaps the most dramatic, soap-opera-like books in Scripture, God drives home a number of messages. I’ll key in on a couple.

When David committed adultery with Bathsheba in 2 Samuel 11, he effectively ensured the presence of the sword in his own house indefinitely (2 Samuel 12:10). The rebellion of his son Absalom, its accompanying death and immorality and a whole bunch of the Psalms (That’s right! Inspired Scripture!) were direct results of his sin with Bathsheba. To be sure, the deaths of Uriah (Bathsheba’s husband), David and Bathsheba’s baby, Absalom, and several others (e.g. Shimei of Saul’s house, even David’s son Amnon) can be traced back to this particular sin done in private.

Similar in principle was when David found confidence in numbering Israel rather than in God Himself, so God struck down 70,000 Israelites (2 Samuel 24:1-17). David’s sin here was considerably more public, but still private in that it was personal. And scores of thousands of Jews suffered the consequence of David’s sin.

Considering God has been trying to teach us this lesson for a while now, we sure have a hard time grasping the concept. Sin is deceptive, and we convince ourselves that the consequence of our sins ends with us – and for some reason this adds to sin’s appeal. The thought process may go something like this: “I’m the only one who will suffer for my sin, and I’m okay with that. So I know it’s wrong, but I’ll do it anyway.”

How about one more lesson?

Ignorance and Good Intentions Do Not Excuse Sin

When David and his chosen men were bringing the ark of God back to Jerusalem, they did so by way of an ox cart (a new one, mind you!). Lo and behold, one of the oxen stumbled and Uzzah took hold of the ark to stabilize it. “And the anger of the Lord was kindled against Uzzah, and God struck him down there because of his error, and he died there beside the ark of God” (2 Samuel 6:7).

Now Uzzah should have known better. For that matter, so should David. They had no business transporting the ark in this manner when it was supposed to be carried on the shoulders of the priests. And it was constructed as it was (replete with rings through which the poles could pass for transport) so that it would not need to be touched. Apparently God wasn’t kidding when he gave those instructions.

Even assuming that Uzzah had only the very best intentions (although the ark should not have been in that situation to start with), his behavior is still inexcusable. If he didn’t know better, that ignorance was also inexcusable.

Over the years, I’ve had countless students lay down the trump card of ignorance when holding them to a standard they said they would keep. “Oh. I didn’t know that were weren’t allowed to wear tutus to school. Nobody ever told me that.” Then their silent follow-up is something like this: “And you certainly can’t hold me accountable for what I don’t know, so I win.”

Well, that doesn’t fly. In fact, it doesn’t really work anywhere in life, and the sooner we understand that, the better.

The application in all of this includes taking responsibility for our actions, which includes proactively learning what God (or the DMV, or the school, or the referees…) requires of us.

David sinned egregiously, to be sure. But he remained a man after God’s own heart, and the people of Israel experienced blessing because of his faithfulness and favor with God. I’d be thrilled if my son turned out like David. While I’d prefer that Joshua not follow David’s example in murder, adultery and bigamy, I love that these things did not exclusively determine the character and person of David. He was marked by mistakes, but he was also marked by repentance (e.g., see Psalm 51). He responded well and learned well from most of his sins, and he enjoyed tremendous blessing as a result.

Mistakes are inevitable. Just ask David. But like David, when we mess up, may we acknowledge our sin and make it right. And may our people experience similar blessing as a result.