In the fall of 2017, the ECS Board released our freshly-crafted Mission Statement.  In October I talked through the Statement at an assembly.  Below are the notes from that talk.  Enjoy.

Many organizations are crystal-clear on their mission before they ever begin.  We had a rough idea, and it’s getting clearer.  While we’ve had a vision of what we were aiming for from the start of ECS, we haven’t had an actual mission statement until last week.

We commend the works of the Lord to another generation

Psalm 145:4 reads, “One generation shall commend your works to another, and shall declare your mighty acts.”

To “commend” is to praise.  At ECS, we intentionally praise the works of God first to you all, with the hope that you will do the same thing, in time, and in turn.

with the tools of classical education,

We don’t just commend the works of the Lord to another generation with our words, but with “the tools of classical education.”  Now this is a big point, saying a lot because classically, education was used to help prepare students to advance culture, equipping them well to do so.  As students learned how to work hard, how to reason, how to organize thought, how the world works and how to present ideas, they were learning how to advance their culture.

So in order for us to do this, we take a long, hard look at history and great books.  We want for you students to know how we got to this point in our culture’s history.  Where did our ideas come from?  What assumptions are behind our laws and customs?  Why do we hold the door open for ladies, and why do we love stories where the hero dies for the ones he cares about?  What does it look like when men try to save themselves?  What’s it look like when men try to make sense of the world we live in without looking first to the Bible?  What happens when people abandon sound reason or call evil things “good?”

An education aimed at advancing culture must include these sorts of discussions.

Sadly, but much of modern education is aimed at separating students from their culture.  Our culture tries to educate young people without examining the Bible that has influenced so much of our fathers’ decisions.  Many multiculturalists (maybe you’ve heard that word) want you to feel badly for the blessings you enjoy, and they won’t be happy until you’re willing to say that every other culture in the world is as great as yours.

We want you to love your culture so that you’ll be grateful for how God has worked to bring you where you are, and so you’ll be excited to actually make your culture better!  And we believe that this is the key to properly loving other cultures!  Just because you love yours doesn’t mean you have to hate others; may it never be!  Loving your culture is an important part of appreciating others’ cultures.

So when we talk about classical education, we’re talking about cultural advancement, which we’ll come to again later in the Statement.

We’ve talked about this a lot before, but this is not just silly happy laughter, this is a laughter that comes from our souls.  It’s a laughter of confidence and gratefulness, and it cannot be squelched by cruddy circumstances or the devil.

Raggants, whether we realize it or not, we are in a cultural war.  It may not involve a bunch of bullets and grenades, but all around us there wages a war of ideas, religious agendas, and moral redefinitions.  And the leaders of the earth try to promote themselves and make a name for themselves…and Jesus laughs at them in derision.

We want to love our enemies, and laugh in the face of adversity.  And that is sometimes really hard.  But laughter is a lot easier when we remember that God is sovereign, He is good, and we’re on the winning side of a war where the outcome has already been determined.

Imagine you were in a war and you happened to stumble into the war room of your enemies.  You saw them gathered around a table looking over your battle plans…and they were confidently laughing.  Wouldn’t you be bothered, at least a little bit?  What if they were watching video footage of battles that hadn’t happened yet, battles where they were victorious and you were crushed.  And they were cheering and laughing with merry fists in the air.

This is not a frivolous, silly, amused laughter, but rather the confident and cheering laughter of the winning side…but before the battles are over.

One of the many evidences that the gospel is not from the mind of man is that our labors are effectual.  What that means is that we can know with absolute certainty that – even though we don’t see the results right away – God will use the sacrificial labors of His people to bring about His will.  He does this all the time.

This is encouraging, because we want immediate and visible results, but discipleship is a long road.  It’s taken you years to get where you are now, and it’s going to take a lot more years for you to get where  you’re going.

God sees our labors even when others do not, but the sacrifices your parents are making and the sacrifices we’re making as a school are actually tools that we are using to commend the Lord’s works to you all.  And our desire is for you to do the same thing for the generation after you.

There is a point to this all, and here we get to it.

they will carry and advance Christ-honoring culture.

And this is it.  We want for you all to be equipped and eager to advance Christ-honoring culture when you leave ECS.  We want desperately for you all to take the baton of culture and run with it!  Run fast and far and laugh heartily along the way!

If you take full advantage of your time here, we’re confident that you’ll have the tools and the ability and the breadth of interest to advance this culture as “far as the curse is found.” 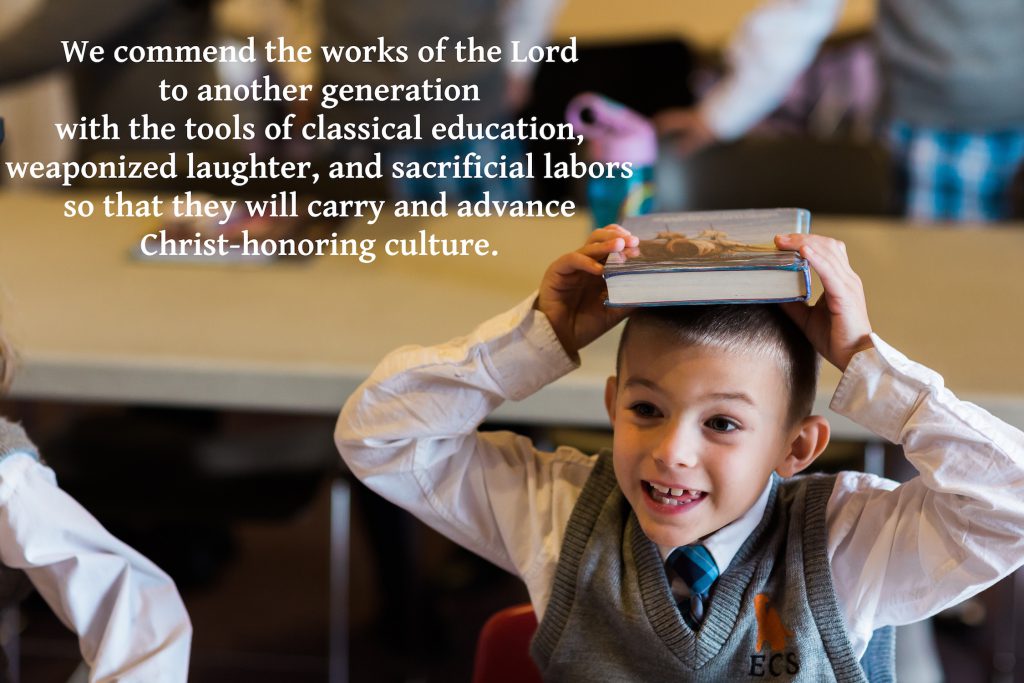