I don’t know about you, but growing up, the “cool” kids in my school were the ones whom everyone wanted to be. They were the best-dressed, the richest, the best at sports, or the most self-assured.

Years later, with the relentless assistance of Facebook, we see that – in many cases – the life that looked so great in junior high became a sad existence later on. There’s no guarantee that the person with the most alluring life in the eyes of the world is the person who is happiest.

The same holds true when we get older. Everyone wants to be a rock star, but there’s a disproportionately high suicide rate among rock stars, too, and we don’t hear people clamoring for that.

Paul was unapologetic when he said the following:

“Now I am speaking to you Gentiles. Inasmuch then as I am an apostle to the Gentiles, I magnify my ministry in order somehow to make my fellow Jews jealous, and thus save some of them. For if their rejection means the reconciliation of the world, what will their acceptance mean but life from the dead?” (Romans 11:13-15).

All of Paul’s ministry had a telos of jealousy. He was working hard (as a Jew!) to make Jews jealous of the glorious blessings the Gentiles were enjoying….and there were plenty of blessings to go around! All the Jews needed to do was repent and embrace their Savior, and they would share those glorious riches with their Gentile brothers. It would then complete the salvation of the full number of the elect, and usher in the end of the age.

Likewise, I make no apologies when I say that we wish to provoke the world around us to jealousy. We want them to want what we have, because what we have been given in Christ is absolutely glorious. We didn’t manufacture it, and we don’t deserve it.

It takes deep humility to boast in the cross. Those who do so proclaim that they have been bought by Christ’s blood and adopted as sons though we were spiritually dead and haters of God. And so when we are happy about our identity in Jesus, we are the cool kids.

As we shepherd young hearts, we see this in a microcosm. The cool kids on the playground are the ones whose happiness is not dependent on anyone else. This is an interesting phenomenon. The kids that are the most fun to hang out with don’t need you to hang out with them to be happy. They’re happy playing by themselves or happy playing with others. The celebrity is rarely content to be left alone; he’s beefing up his Instagram following and “Likes” count. The cool kid can jump rope by herself or play tag with the others with equal contentedness. 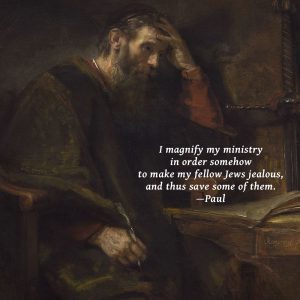 If we have been bought by Christ, we don’t need the approval of anyone else. At the same time, we should be conscious of showing off the gracious goodness of God in how we live blessed and happy lives. The sad and relationally-malnourished world around us is watching with curiosity. And by God’s grace our blessed living will make them jealous in all the right ways…and it’ll make our enemy pretty cranky. Laughter is war.

When I think about what I want for our students to become like, I want them all to be the cool kids whose life is actually worth wanting because it’s a life of blessing that they didn’t earn and that any can have who will live in happy submission to Christ and in fellowship with others.