The following article was written by Mrs. Bowers and is included in the Raggant Standard from March 3, 2017. 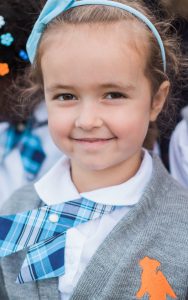 When most people think of uniforms they conjure up ranks of faceless soldiers, grease-spattered and braces-bespeckled McDonald’s workers, or straight-laced English schoolchildren standing rank and file under a grey mizzle.

Certainly there is a type of uniform that seeks to flatten and deface–a bit like the Green Witch of Underland and her Earthmen, or the above instances. The point in these scenarios is to not be unique–to efface individuality in the interest of uniformity and obedience to orders (sometimes with life-or-death consequences).

I would like to argue not for uniform uniformity at ECS, but for harmony. As I was discussing this with Mrs. Higgins, she brought up the example of singing, and as we like singing here, it seemed an apt analogy. We love all the individuals of ECS with their quirks, strengths, weaknesses, and oddities–and we love all of that being present within our two choirs. However, the goal of a choir is harmony. We have some strong singers, but those strong singers need to learn to harmonize so everyone makes beautiful music together. There will come a time–within the school and without–for that individuality to shine, but that is not the primary emphasis of daily song, nor daily learning. Much like within the Church, we love the toe-ness of toes and the finger-nail-ness of fingernails–and sometimes we stub our toe and it has its moment of grandeur–but we are part of one body. Our students are part of one school–as they learn and are equipped, they are in it together, encouraging and edifying and challenging and even teaching one another. Our harmonizing of gifts and talents is liturgized (of course that’s a word) in our uniforms.

We desire blending in this sense, but we also want close-knit unity. Students can hit all their notes while casting a vicious sidelong glance. We may not be seeking the same uniformity of the military, but we are in a fight, and there are a lot of arrows being whittled around here. And what exactly is school for? It equips them to be winsome, deep-souled worshippers of the triune God. This is squire-academy for valiant fighters-in-training. We are part of the same squad, team, group, and unit–this is the training ground and boot camp for future battle, and as such, we come dressed for the occasion. This is not so kids won’t be distracted by others’ clothing choices (because you can’t prevent distraction in a world of squirrels and snowflakes), nor for the ease of knowing what to wear in the morning, and not to equalize the playing field of fashion (because the mayfly and Michael Jordan alone evidence that no playing field, animal or otherwise, is equalized).

It is to remind the students that this is their job–this is their people–this is their fight, and they are all in it. Little or big, fast or slow, older or younger, a uniform presents a physical, instant recognition of inclusion and solidarity.

Amongst this harmony and unity, we also seek clear identity. To borrow yet another analogy, did any of you fuss when you donned the uniform of your high school or college sport’s team? You may have disliked how something rode up in the wrong place, or the shortness or tightness of an item, but you didn’t mind wearing it. Your parents may have gulped when they wrote the check. But they did it. It was worth it.

Why? First, it was an accomplishment. You were proud of where you were, and you were excited about the history of that school and program. It identified you as part of something. We want the Raggants to feel the same way – they are all a part of something BIG and AWESOME. I will try to tease it out in a future article, but we even wear the plaid skirts as a nod to Scottish Presbyterians who planted Classical schools as they moved across the country. There is history and weight here, and we want to rejoice in that (and identify with the Scots, because….haggis. And golf.).

Second, it was the accepted and pragmatic uniform for the sport. We wore these hideous full-body leotards in crew because you didn’t want anything catching in the shell (and chafing is a beast). Swimmers wear suits that will minimize drag. In the same way, uniforms help us to minimize academic drag – we are here to work – we are here to be part of the team – we are here to learn and fight and win and be proud of the whole process.

Third, uniforms are a representation of something–we identify uniforms with teams and countries and cities–if we are doing things right, the longer our students wear uniforms, the more they love them because the more they love what the uniforms represent. Of course it could all dissolve into high-flung legality and high-nosed pomp, but that’s part of why we are the only school on the PLANET who wear a little, tubby, basset-hound-unicorn-rhinoceros on our uniforms. It’s just downright cool, and it helps keep us in our place.

Finally, uniforms are utilitarian. They make it easy to tell who is who in the parking lot or on the court. They make dress code enforcement far easier, and mornings less complicated. In the long run, especially with a system and numerous offspring of the same gender, they save a good deal of money. They (hopefully) reduce the stress and pressure of the Fashion tyrants who exert their iron will in back-to-school sales and commercials.

Uniforms carry the force of tradition and weight of history–from the slums of Haiti, where students without enough food still get dressed in crisp uniforms on school days, to the robes and jester-hats of Medieval Professors, we stand with them. Uniforms are, in the end, just exterior. But like a squire who finally proves himself worthy of knighthood, as our graduates lay aside navy cardigans and white button-up shirts, our hope is that they will do so with a sense of fondness–a thankfulness for the training they received in those uniforms, training which now well equips them to don new uniforms in new adventures.