The following article was written by the Unruly Headmaster, Mr. Sarr, and is included in the Raggant Standard from February 7, 2017. 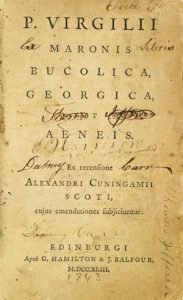 Lately I’ve had a couple of curious parents ask me respectfully and sincerely why we study Latin. A lot has been written about this subject, and much of it is very helpful.

Let me commend to you a couple of very accessible resources:

And there are lots and lots more, but those two are a good start.

Now that I’ve done that, let me offer a few (quite unoriginal) thoughts of my own…many of which have been inspired by the above (and other) resources.

We still have some wrinkles in our Latin program and offerings that we continue to work out, but we’re convinced that, as G.K. Chesterton famously said, “If a thing is worth doing, it’s worth doing badly,” until we can get good at it. Latin is worth working for, and our children will be better off for it.