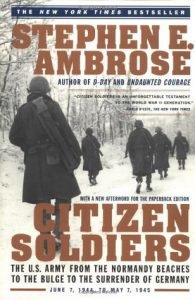 In Omnibus VI, we’re currently reading Citizen Soldiers, which is a treatment of “The US Army from the Normandy Beaches to The Bulge to the Surrender of Germany.” It’s been a fascinating study, and many of the students have devoured the this hefty historical volume, intrigued by the European Theater of WWII.

This week as we discussed the book, we took the helicopter up another thousand feet to examine how the young men whose character was forged in the foxholes and firefights of France and Belgium were uniquely prepared on their return to lead America into a time of remarkable prosperity.

I’m sure there are a host of factors, but I would suggest that at least part of the explanation is that in post-WWII America we had introduced to our workforce and society thousands of men who had been forced (in battle) to perform under pressure, to adapt to terrible circumstances, and to persevere in unfavorable conditions. These skills transferred well to just about any context, and the result was America’s economic and political flourishing.

But there were down sides, too. These very young men went off to war before many of them had learned how to be faithful husbands, loving fathers, and sacrificial leaders. In war, many of their leadership examples led from a safe distance, making some terrible decisions because they were so safely removed from the grind of the front lines. Not surprisingly, many of the front-line soldiers returned to American society and practiced the same thing with their children. Many of those Baby Boomers were then born to incredibly capable but sometimes detached parents who wanted their children to have a great life, but who did not train their children to handle responsibility and adversity as they had learned in battle. The moral revolution of the 60s and 70s didn’t come from nowhere.

I really wish that I could say that our culture learned its lesson, repented, and started taking more proactive measures to disciple and provide for our children. Quite the contrary, we’ve outsourced their training to the state. We’ve modeled for them that work is bad and we should do as little of it as possible. We’ve even taken measures to eliminate them before they’re born if they’re too much trouble.

We still reap the benefits of the remarkable, dominion-taking labors of The Greatest Generation. But three generations later, we have nearly none of their work ethic. It’s our desire that Raggants who are stout image bearers and copious producers have the work ethic of their great grandparents while also having modern resources.

But in order to cultivate that in them, we have to try as best we can to reproduce some of the lessons from the Belgian trenches and make them happen in the classroom, the kitchen, the back yard, or our imaginations. (Praise God for good books). May God bless our efforts as we do so.