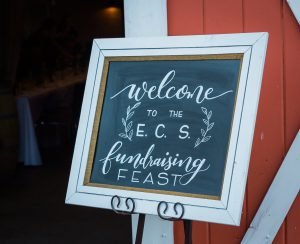 When I give a talk I prefer to build up to a Big Reveal. This time I will tell it to you up front, then go back and explain what I mean and why it’s important and what you should do about it. Here goes: Since the start of ECS I believe that no one has learned more than me. I have reasons for this claim and, if it’s true, I also believe that no one has been more blessed than me either. Of course, I’m happy to share, the blessings and a bit of the story.

On a spring afternoon seven years ago my wife wanted to talk. She had just finished a marathon math lesson with our oldest daughter, who was in third grade at the time and whom we were homeschooling. Math was a sore spot in those days; things just weren’t adding up, if you know what I mean. But math was merely part of the problem, and there was no answer key. Both Mo and I were coming to realize how big an education we wanted for our kids and we were detecting a mismatch between that vision and our capacity to give it. I had attended public school, Mo had been homeschooled, and I was excited for her to homeschool our kids. I thought I was a pretty impressive husband for how supportive I was of her work.

But that discussion on that afternoon was less like realizing that we needed to upsize to a mini-van and more like realizing that we needed to get a 747, and that we were going to have to build one with instructions ordered from the back pages of a Popular Mechanics magazine. While we talked about a few options, she finally said, “Look, Sean, you are going to need to be exhausted educating our kids, so you better figure out the best way to do it.” That is a haunting, prophetic exhortation, and I wouldn’t be giving this talk without it.

One of the options we discussed was trying to convince some other crazy families to start a classical Christian school. But since all she and I had done at that point was read about those elusive creatures called classical schools, we decided it might be good to get some experience at one of them to see the theory running around in plaid skirts. We enrolled our kids at Providence Classical Christian School, located in Lynnwood at the time, a 40 minute drive one way without traffic. Maggie entered in 4th grade, Cal started Kindergarten, and we knew within a week that we found the good wine, like the kind Jesus made.

Around the same time we bought a three-ring binder from the Association of Classical and Christian Schools on how to start a school. Ha! Jonathan was excited about the possibility, as were a few other people that were at least willing to indulge the dream. We started reading, a lot. We talked, a lot, about truth and goodness and what is beauty and why bother. We wrote a vision document and statement of beliefs, chose a name, a mascot, and a motto. It took us another five years to get the mission chiseled into one sentence. It’s easy to blather and hard to summarize for that elusive elevator chat. It’s even harder to get off that elevator and do something.

While we loved homeschooling, and we loved PCCS, we wanted more people to have access to this worldview-ing in the Marysville area. One option we discussed, and I’m not joking, was to buy a bus and commute en masse to Lynnwood every morning and afternoon. Instead, we started with twelve students, K-10th, in a farmhouse basement in the fall of 2012.

Initially, I thought I was going to be exhausted telling students all the things I knew. I mean, I was an involved parent, pastor, board member, teacher of Latin, and reader of school-starter notebooks. Turns out, I was exhausted trying to figure out all the things I didn’t know. I had to learn what sort of scissors exercises help penmanship in the pre-polly stage and why cursive handwriting is better than printing. I needed a better answer for Why Latin? than that “it’s classical,” and hard. How old should someone be to start Kindergarten? Why are school desks actually a thing? What do you do when you don’t have lockers or desks or your own space to leave things so that 8 year-olds are carrying 30 pound backpacks around? What sorts of character do we want our graduates to have?

Sheesh. That doesn’t include trying to read and learn from the books and history that I didn’t pay attention to when I was a student. I’m part of a group of auditors that will finish the 6th and final year of Omnibus in a few weeks. We’ve done Hammurabi, Homer, Herodotus, Hitler, Hobbes, Hemingway, and Huxley, and that’s just one letter of the alphabet. I had a master’s degree with almost no mastery of economics and politics. Or fiction. We had to start a fiction festival just so I could do my penance to generations of librarians and literature teachers.

How do you know when it’s too much lazy complaining about homework, or that it’s actually too much homework? What is the maximum student load for a class? What if you have five more students than that number, but you don’t have that money to pay another teacher?

How do you encourage teachers who are exhausted and trying to figure out the best way to love and teach their students, but also enable them to have a life for serving their own spouse and kids?

These are all great questions. Weighty questions. Pressing questions. Exhausting questions. And, would we really want it any other way? This is our place, and it is the place where God grows us.

If you listen to professional educators, and especially education lobbyists, they’ll rant on repeat that the system needs more money. Let’s raise a levy. Get more government grants. But, many schools have gotten more money and not gotten more smart. Maybe some day God will give us such an overfunded budget that we don’t know what to do with it, but money never made a mental muscle. No check ever created hunger to learn. Gifts may be sweet, but they don’t increase strength.

The feast we’re enjoying is festive because of vision of something great and many sacrificial labors to deal with the difficulties of getting to that vision. It’s true of this barn, of this meal, and of our school. Those for whom it is the tastiest are those who have given themselves to the voluntary work of being uncomfortable.

We’ve hired full-time and part-time men and women who will and do give their lives for their students, not because they know it all, but because they hate that they don’t. They’re not education experts, they’re education desperates.

This is not a bug, it’s a feature. While we are giving our kids an education that we didn’t get, we are giving them an example of being exhausted toward something that’s worth it. This isn’t because these are the only people we could find, it’s because it’s the kind of people we want to graduate.

The best work doesn’t need to get stuck in the founders generation, the ones who walk from cup of coffee to cup of coffee. The goal isn’t getting established, with enough faculty and facility and funds. The goal is not getting settled, and having a faculty and facility and funds that get us into new uncomfortable positions. The fundraising feast is not about meeting our current needs. It’s to make it so that we have more needs and bigger needs.

The very first assembly message I gave was about how wise people change their mind, regularly. Either you know it all at the beginning, or you stay in your bunker, or you have to learn.

Little did I know how little I knew, or how costly and painful it would be to learn. I’ve learned more than anyone because I had more than anyone to learn. But thanks be to God who delivers us from sin and ignorance, who gives us freedom in Christ to learn about, and love, all that Christ claims as His. Thank God for kids who love it. Maggie told me this is one of her favorite nights of the year; I wouldn’t have imagined. Thank God for teachers who keep growing, for a school community that keeps singing more loudly and harmoniously.

Many of you feast on similar blessing already (even if mine is bigger!). Others of you could join. It is costly. It takes time, repentance, even money. But as Paul told the Philippians, he didn’t want their financial gift for himself, but “the fruit that increases to your credit.” To train a generation of those who will give (produce, create) rather than take (consume), we must show them what it looks like to have skin in the game, which means we’ve got to roll up our sleeves.

So thanks for enjoying some of the labored for fruit with us. Consider giving, not so that we can be more comfortable and get out of work, but rather so that we can get more people to enjoy the work of learning, and all its blessings.

These are the notes from my talk at last Friday’s Fundraising Feast. –Mr. Higgins