These are notes from my talk about the Trivium at last week’s Information Night. 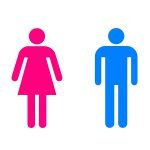 One of the best things about the daily nuts and bolts at our school is that we have separate bathrooms for boys and girls. I don’t start this way to get a laugh or to cause a shock. Gender specific facilities are important for modesty—though that’s not my primary reason for mentioning it. They are important for morality—though sin doesn’t depend on any given door being closed.

I bring up the distinction between male and female because we cannot have true learning or lasting culture without it.

Of course we couldn’t have following generations without male and female because humanity requires sexes in order to reproduce. Efforts to deny observable biology are efforts that destroy not only individuals, but also the future where any individuals could exist.

But I bring up male and female because God created and identified us that way.

Then God said, “Let us make man in our image, after our likeness. And let them have dominion over the fish of the sea and over the birds of the heavens and over the livestock and over all the earth and over every creeping thing that creeps on the earth.”

So God created man in his own image,
in the image of God he created him;
male and female he created them. (Genesis 1:26–27, ESV)

This means that part of bearing God’s image is being social, a reflection of the “us” and “our” in verse 26. We are made in the likeness of the Triune God. This also means that both males and females are equally image-bearers. They are different, so they receive different names and different responsibilities, but neither man or woman is more like God than the other.

It also assumes that our image-bearing relations and image-bearing responsibilities require us to acknowledge what God has made and what God has said. Boys and girls share some things yet they do not share all things, nor are they interchangeable. To deny or even to confuse this truth is to deny or confuse any possible foundation for learning.

After the poetic, lyrical celebration of male and female in Genesis 1:27 (if our culture succeeds at obliterating the distinction, what kind of songs will we be left with?), God gave a mandate.

And God blessed them. And God said to them, “Be fruitful and multiply and fill the earth and subdue it, and have dominion over the fish of the sea and over the birds of the heavens and over every living thing that moves on the earth.” (Genesis 1:28, ESV)

We must must receive the definitions and boundaries created by God. What are animals? What kinds are there? What are we supposed to do with them? What is dominion? What can we subdue? What are we going to eat (see verse 29)? These are necessary questions, but if we won’t accept the created realities of male and female, realities that are self-evident and Spirit-revealed, how can we be trusted with anything?

A classical Christian education begins with basic facts like these. It is called the Grammar stage of the Trivium (which means “three ways”), and it acknowledges that every subject of study has created realities or historical realities or revealed realities. We are not trying to rewrite or redefine. We’re receiving what God has made, what God has done, what God has said.

Birds and fish and bugs, planets, and plants are all different, as are the letters and phonograms of the alphabet. Numbers classify and quantify objects and ideas, narratives show truth in a different way. These are particulars to be acquired.

The school board is reading a book by Gresham Machen, Education Christianity and the State, and he lamented that so many school systems (in 1925!) want kids to be thinkers but the teachers don’t give them anything to think about. “It is impossible to think with an empty mind” (p 7). No facts and no figures because they aren’t fun. There is no est, only non est.

[Such a student can] not succeed in unifying his world for the simple reason that he has no world to unify. He has not acquired a knowledge of a sufficient number of facts in order even to learn the method of putting facts together. (p 4)

New things are collected all the time at every stage, but collection is the special focus of our Grammar School. The youngest students delight to soak in dates and names and conjugations by song and chant and sound-off and reading. They learn about the sun and moon, right and left, right and wrong–in math and morals. They are taught definitions about masculine and feminine, without which they cannot decline any Latin nouns.

The second stage is the Dialectic or Logic stage. The emphasis during these years, roughly corresponding to Junior High, is less on collection and more on categorizing, less on soaking in and more on sorting out. Students are taught formal logic, learning what constitutes an argument, what is valid, what is sound, and what is empty or false.

In her essay, “The Lost Tools of Learning,” Dorothy Sayers tipped her hand:

It will, doubtless, be objected that to encourage young persons at the Pert age to browbeat, correct, and argue with their elders will render them perfectly intolerable. My answer is that children of that age are intolerable anyhow; and that their natural argumentativeness may just as well be canalized to good purpose as allowed to run away into the sands.

During this time students are systematically exposed to various ideas and worldviews, especially through the classical works of ancient, medieval, and even some modern literature. They’re learning to see what fits and what is false. They are able not only to distinguish between male and female but also to develop convictions about it.

The third stage is known as the Rhetoric stage. While students are always answering or writing or performing, the emphasis of this stage happens in the last few years of high school. Students learn things to think, how to think things through, and then how to express their thoughts in speeches and papers.

This is a time not just to know the truth or to defend the truth but to adorn the truth. Even as male and female, men and women ought to be adorned differently. We not only recognize a difference between genders for sake of bathrooms and uniforms, but even in what we want them to become. Both our young women and our young men should be well educated, both bearing the glory of God’s image, and both expressing things that the other can’t and shouldn’t even try to do.

The classical model values the Trivium as scaffolding for the building. The blueprint itself comes from God’s Word. He has said, He has given, He has created, so we give thanks and receive and study and steward. The Trivium helps teachers cut with the grain as students are generally suited to soak in and sort out and speak up as they mature.

Google may be able to marshal facts, but it can’t train a student in logic or rhetoric. Without grammar logic falls and rhetoric is vacant. We’re educating our students with all three.

We start by acknowledging Christ as Lord and Savior, and then acknowledging our identity and created definitions by God. Otherwise learning collapses in a heap of inconsistent relativities and society ceases because no one even knows what male and female are, let alone which bathroom they should use.